One of my colleague asked me this question, Is there a way to generalize a function to remove last two (n) characters from a column if the column doesn’t has a fixed length.  Yes it can be as below

The function calculates the length of the string and removes last n characters using LEFT() function.

Here is the kicker I wanted to share with you, Is it possible to flip the above function using RIGHT() to remove first n characters from a Column(string), yes it is possible:-)

The query can be written as

Here is the snippet from my machine,

Microsoft has introduced three new permissions namely Connect Any Database, Impersonate Any Login and Select All User Securables in its SQL Server 2014 version. The CONNECT ANY DATABASE permission seemed more interesting to me from a developer perspective as we all have come across situation if we had this permission we could have avoided a sad face:-(. In our daily life we work across different servers and databases but sad reality is that the developer doesn’t has permission to access all databases across every server he works. Classic example is a developer working for marketing team having access only for a Marketing database and may not have access to Finance database. So what happens if he accidentally hits the Finance database? A dialog box opens with a message saying “The database is not accessible” this caused a sad face in me many times. The CONNECT ANY DATABASE permission is the solution for it by which it will allow the developer to connect any database in the server and will not have him access to the underlying DB objects thereby preventing the dialog box.

I created a SQL Server Authentication login for this demonstration and name it as SqlCastTest. Its default permissions can be viewed by Right Clicking the Login and opening its Properties window under tab Securables. The Effective permissions could be seen like below. 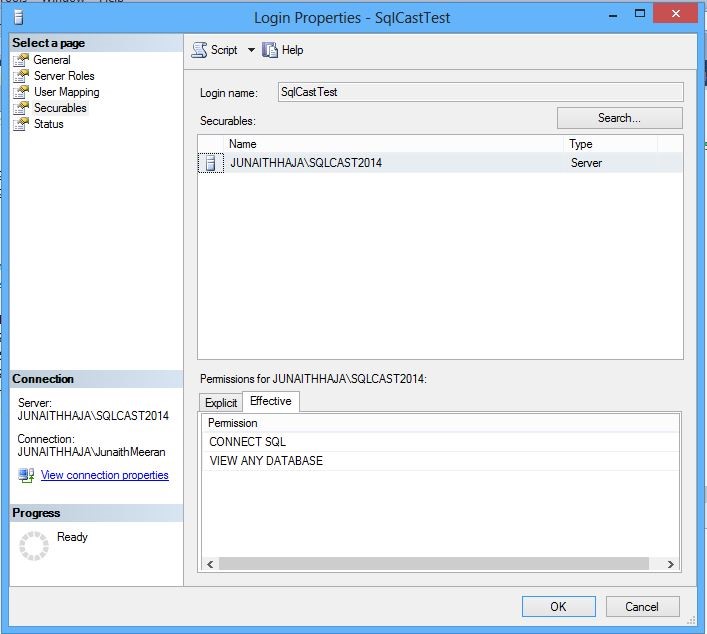 Let’s try opening the database SQLCAST2014 through this login in object explorer and it will pop an error message as follows. 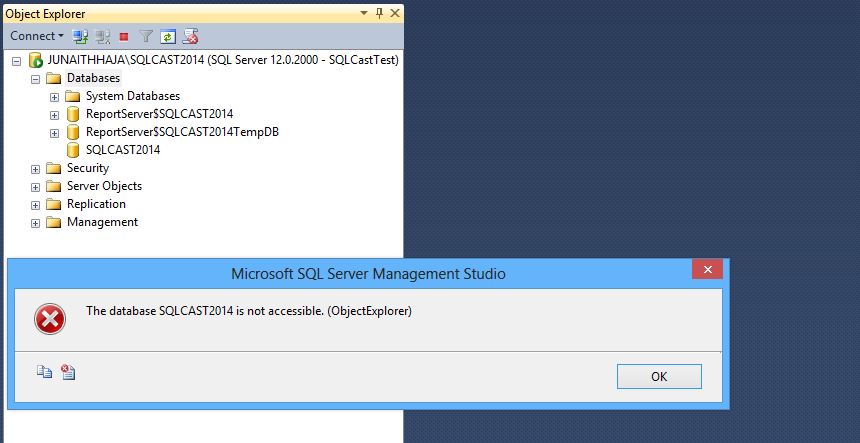 GRANT CONNECT ANY DATABASE TO [SqlCastTest]

Now let’s try connecting to the same database and it will let us connect to it as follows. 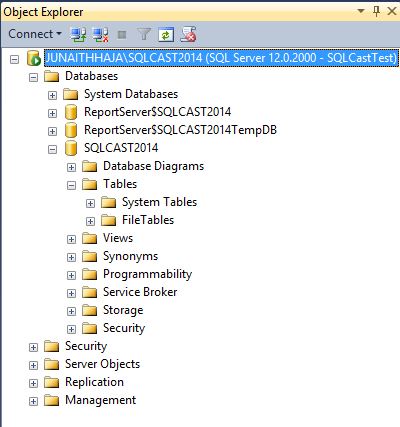 To verify our drill let’s check the new permission available at Securables tab in Login, 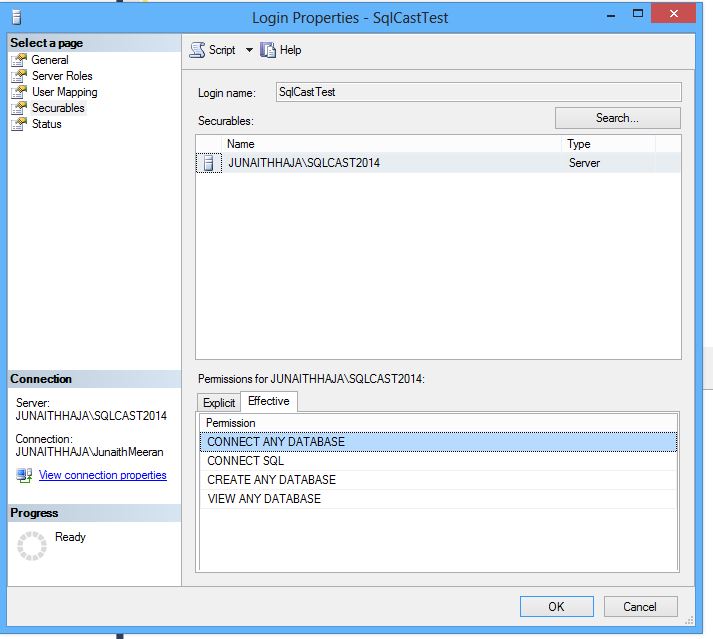 Microsoft has improved the way Select * into works in SQL Server 2014 by enabling the Select * into to run in Parallel mode.In this mode the query will run parallel across available processors providing a significant improvement in performance. I have used the Production.TransactionHistory  table from AdventureWorks database and altered the table to hold 27 million records for this illustration and named it Production.TransactionHistorySample.The database compatibility level should be set to a minimum of 110 for this feature to work.

The below code took only 4:53 minutes to execute in SQL Server 2014

The same code took 11:53 minutes to run in SQL Server 2008R2. So awesome is the parallel  mode execution in SQL Server 2014. On a quicker note, a developer can make use of this feature in creating staging tables which will be very fast. Do try this feature when you get a chance and share with me your findings:-)

Microsoft has introduced a new feature called Delayed Transaction Durability with its SQL Server 2014 version which aims to reduce the delays happening at the transaction level and to facilitate a full time availability of the database to the front end client application. By default, the transactions in SQL Server are durable which means the committed transactions will remain in the system even after a system failure. With its 2014 version Microsoft has introduced two types of durability in its transactions as follows,

Consider a data entry user using a front end application built by ASP.Net backed by a SQL Server database. When the data entry operator enters 100 records the data gets written into the log file of the database and when he hits submit button from the Client application, the 100 records are moved from the log file into the data file. During this process the user will not get the control of client application until write process from log file to data file gets completed and he wouldn’t be able to process/enter any data at front end level (This corresponds to the processing screen which appears when we submit data over a website – annoying right?).Once the write process is completed, the log file becomes available and the user gets availability of the Front End and continues with his work. This process is called Full Transaction Durability. On the pros side there are no data loss and on the cons side there will be a significant latency at the client side application.

In this method a buffer is used at the log file and the data is sent periodically to the data file whenever the buffer gets filled up. Imagine if the buffer has the capacity to hold up to 25 records flushes the data to a data file once it gets filled up. Flipping the above said data entry process for this method, the data gets written into the data file when the user enters the 26th record and when he enters the 100th record and hits submit, 75 records were already moved to the data file and only 25 records needs to be moved which will be taken care by the buffer flush and the client application is readily available to the user when the write happens which mean a no wait time. This process is called Delayed Transaction Durability. The latency at client side is significantly reduced and user is given an all-time availability of the client application. The DBA has to configure the database to handle full durable/delayed durable transactions.

We know from our experience with previous versions of SQL Server’s that there are two ways to create an index in a table.

One is to Right click the table at Object Explorer level and create it.

Second is to explicitly write a T-SQL statement starting with Create Index on Table name after the create table statement.

There is a single pitfall in the above two methods, the index cannot be created simultaneously within table definition like a Primary key or Foreign key constraint. SQL Server 2014 overcomes this draw back by facilitating to create an index within the Create table definition which is referred to as Inline Specification for Index creation.

Hence the index could be defined as below within the Create table statement,

The above code will create a Non Clustered Index named IX_RATE and can be checked from SYS.INDEXES table by using the below query.

SELECT * FROM SYS.INDEXES WHERE NAME=‘IX_RATE’

However the  above create table code will fail in SQL Server 2012 and earlier versions with the following error.

Incorrect syntax near ‘INDEX’. If this is intended as a part of a table hint, A WITH keyword and parenthesis are now required. See SQL Server Books Online for proper syntax.

Hence 2014 makes our coding easier. The Inline specification can be extended for Clustered and Non Clustered Indexes with varying number of columns as needed and can be found in MSDN site.

I would say the top notch feature of SQL Server 2014 is In Memory OLTP concept. Do you know how we view an image or video stored in our hard disk? The image to be viewed is brought to the Main Memory from the hard disk through the software service and it helps us to see the image. The same happens in case of SQL Server too. Generally, the data stored in SQL Server is in the form of data tables called disk based tables (The disk based tables are our regular tables which we were using from 2000 till now). Consider if we run a query against the disk based tables using the SQL Server Management Studio, the query gets executed and the result set is produced to us through the main memory. In other words, the result set lies in the memory as compared to the original data from a disk based table stored in the secondary storage device. Technically there is no storage happens at main memory level. Hope this reminds us all of a concept we studied in our school days that Main memory is meant for faster processing and secondary storage is for storing the data, am glad it didn’t change. One obvious question hits our mind now; with all the advancement in DB applications is it possible to store data in main memory? Yes we can. It’s called Memory Optimized tables, a new feature built by Microsoft for SQL Server 2014 version

Did I not realize one thing that data in a memory will be lost in the event of power failure, so what happens if the server gets shut down or a system crash happens? Yes of course the data stored in the memory will be lost but it can be recovered when the server is up and running through Checkpoints which keeps a local backup of the data in memory optimized table as a file group in the hard disk. Memory optimized table does comes with lot of pros and few cons which I wouldn’t be able to summarize in a single post. I would recommend you to go through the White Paper Microsoft released about In Memory OLTP over this weekend and remember to utilize this feature when we get to work with 2014.Here is the link for the White paper.

I would like to finish up this post with the syntax to create a Memory Optimized table as below,